There's Nothing Micro About a Billion Women: Making Finance Work for Women 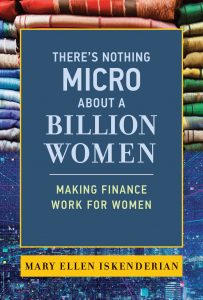 One billion women have been completely excluded from the formal financial system. Without even a bank account in their own names, they lack the basic services that most of us take for granted—secure ways to save money, pay bills, and get credit. Exclusion from the formal financial system means they are economic outsiders, unable to benefit from, or contribute to, economic growth. Microfinance has been hailed as an economic lifeline for women in developing countries—but, as Mary Ellen Iskenderian shows in this book, it takes more than microloans to empower women and promote sustainable, inclusive economic growth.

Iskenderian, who leads a nonprofit that works to give women access to the financial system, argues that the banking industry should view these one billion “unbanked” women not as charity cases but as a business opportunity: a lucrative new market of small business owners, heads of households, and purchasers of financial products and services. Iskenderian shows how financial inclusion can be transformative for the lives of women in developing countries, describing, among other things, the informal moneylenders and savings clubs that women have relied on, the need for both financial and digital literacy (and access) as mobile phones become a means of banking, and the importance of women's property rights. She goes on to make the business case for financial inclusion, exploring the ways that financial institutions are adapting to help women build wealth, access capital, and manage risks. Banks can do the right thing—and make money while doing so—and all of us can benefit. 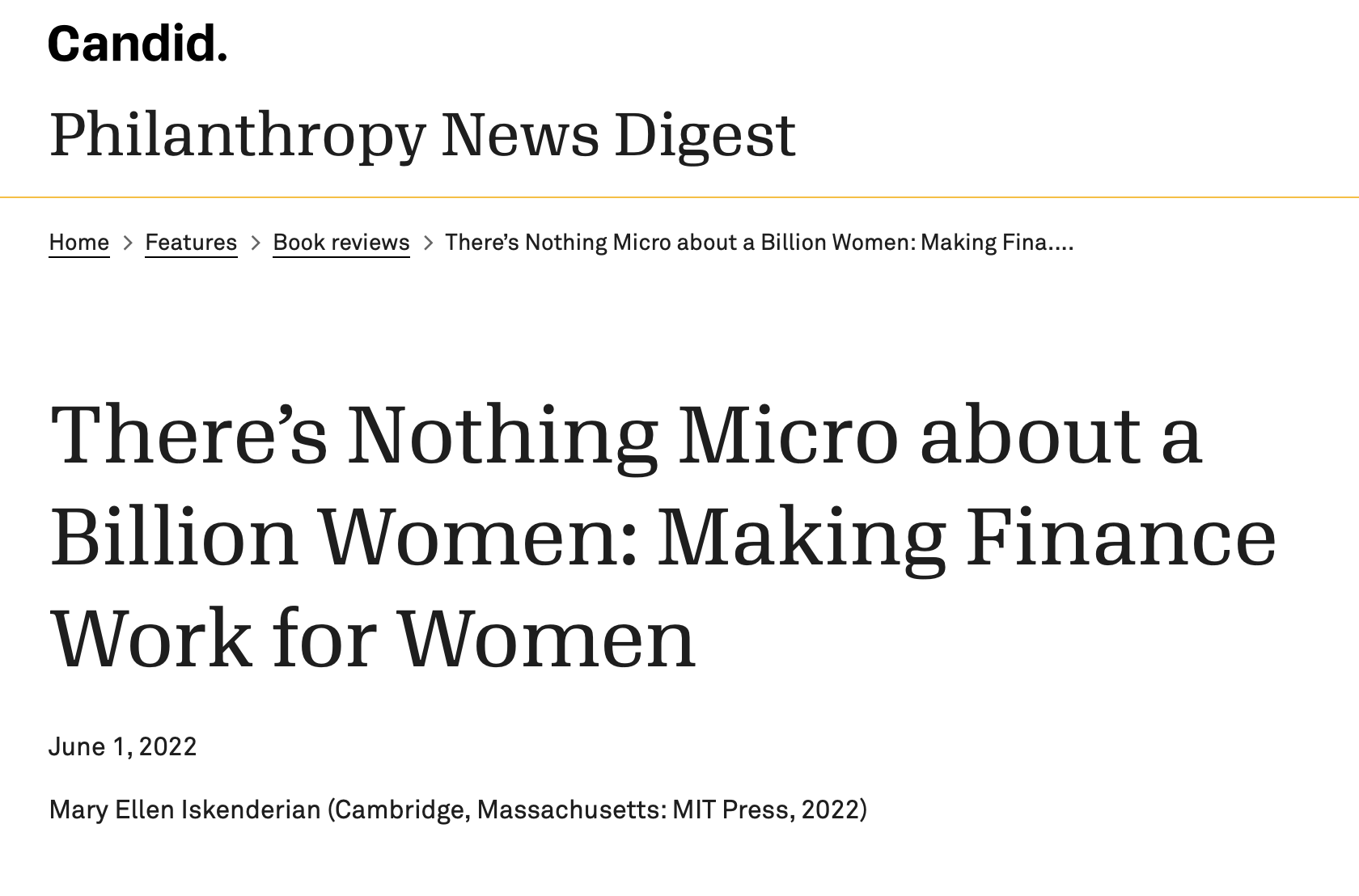 There’s Nothing Micro about a Billion Women: Making Finance Work for Women 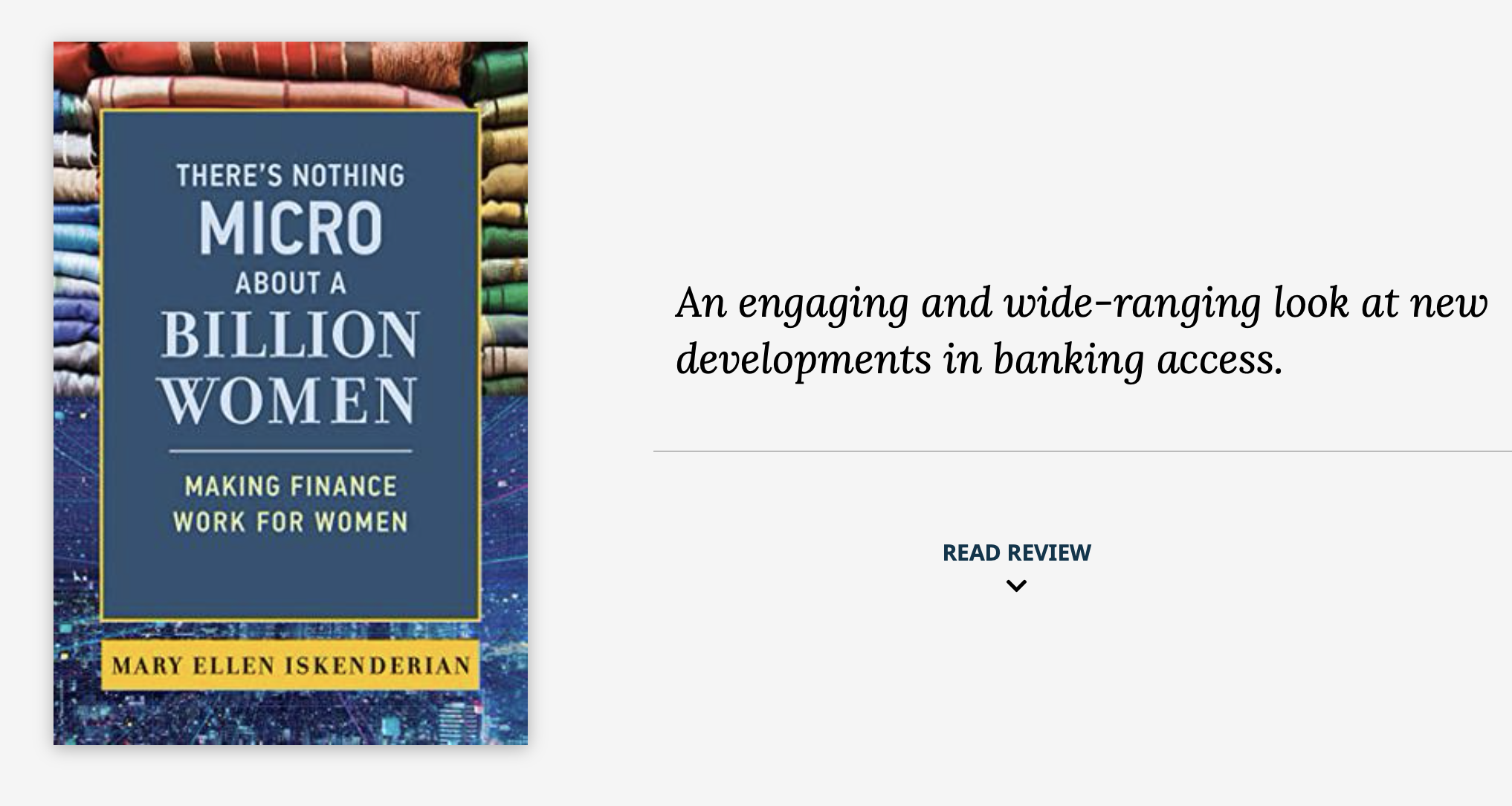 THERE'S NOTHING MICRO ABOUT A BILLION WOMEN MAKING FINANCE WORK FOR WOMEN BY MARY ELLEN ISKENDERIAN ‧ RELEASE DATE: APRIL 19, 2022 READ MORE A comprehensive look at how to bring more women into the global financial system. In this debut nonfiction book, Iskenderian, the head of Women’s World Banking, a nonprofit focused on women’s […]
Read More

Excerpt from There's Nothing Micro about a Billion Women: Making Finance Work for Women

Seeing Joyce Wafuko sitting in her small office at the back of the hardware store she owns, papers stacked on a large table that takes up most of the space in the room, invoices and other notices tacked up on the bulletin boards that line the walls, it would be difficult to imagine the road she has traveled in the last seven years. Joyce lives in a small village outside Mom- basa, Kenya's second largest city, where she and her husband had settled a decade earlier to raise their three children, near both their families. After a few years, her husband had been unable to find steady work in the village and reluctantly had gone to the city to become a policeman. But the money he sent home wasn't enough to support their family, so Joyce decided to start a business to supplement his earnings. She noticed that her neighbors lacked the supplies to make even the most basic repairs to their homes, so she thought a hardware store would be a good addition to the village. She was a member of an informal savings and loan group with other women from her village, but the amount she was able to borrow according to the rules of the group was relatively small and not enough to launch her business. When she asked about a larger loan at the local bank branch, the manager told her they didn't finance "startups" and that she should come back after the business was up and running. When it was her turn to take home the monthly "pot" from her savings group, she put most of the money into starting her business, although in a smaller way than she had originally hoped. Joyce has kept a photograph of her first shop pinned to the corkboard in her office. It depicts a small corrugated metal shack on the side of the road with a smiling Joyce standing beside her inventory: some two-by-fours, loose nails, eggs, and tomatoes. After operating this stand for a few months, she heard about a micro- finance institution called Kenya Women's Microfinance Bank a few miles from her home and applied for a loan at the branch. The bank gave her a $70 loan and some training in bookkeeping and budgeting, which she parlayed into a booming hardware business that, seven years on, sells a full range of home improvement tools and housewares. Joyce is still a client of Kenya Women's and maintains a $3,000 unsecured revolving line of credit with the bank. A few years ago, she went back to see the bank manager who had previously turned her down for a startup loan. They discussed her growth plans for the business at length, and he expressed enthusiasm about supporting her with a loan. But when he broached the subject of collateral—he estimated that the bank would need her to pledge property equivalent to about 130 percent of the value of the loan—she thanked him and left the branch as quickly as possible. The interest rate on her loan from Kenya Women's was high at 35 percent, but neither she nor anyone in her family had the kind of collateral a bank loan would require as security. Even though Joyce has a banking relationship with Kenya Women's Microfinance Bank, she continues to participate in her community savings group because she enjoys the social interaction with her neighbors and the discipline of having to save a certain amount every month as a requirement of group membership. However, she also derives a sense of security from keeping most of her savings in an account at Kenya Women's (she had pre- viously thought that interest was only something you paid on a loan, not something you could earn on deposits). But the real game-changer in her financial life took place a few years after she began banking with a micro- finance institution. M-Pesa, Africa's first mobile money transfer service, burst onto the scene, upending all her ideas about convenience, security, and the cost of doing business. M-Pesa made it possible to pay vendors or utility bills, deposit funds in her bank account, or receive money from her husband or her customers through the cell phone in her pocket. This was a far cry from having to take a bus to a bank in another town during her